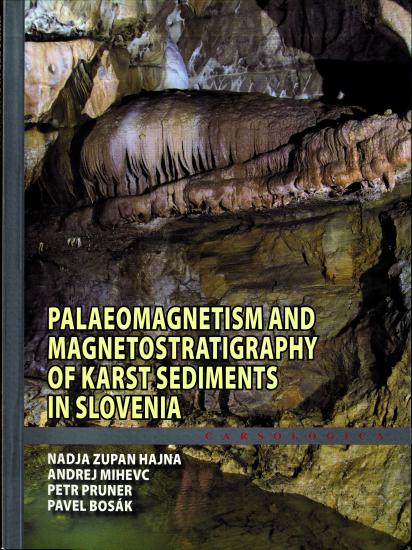 Palaeomagnetism and Magnetostratigraphy of Karst Sediments in Slovenia.


The aim of this book is to set out the results of common Slovene-Czech researches during10 years when karst superficial and cave sediments grouped according to age and depositional environment in various geographical and geological regions of Slovenia were intensively researched mostly by different palaeomagnetic methods. Palaeomagnetic sediment researches have brought surprising results related to the age of sediments both on the surface and underground and consequently also the first detailed information about the age of caves and indirectly the age of our karst. By comparing these data the time of sedimentation is obtained. At sampling the sediments for palaeomagnetic analyses we found in some cases the fossil remains of fauna; these findings are very important as they allow setting out the palaeomagnetic and magnetostratigraphic analyses into precisely defined time.

The introductory part describes the problem of cave sediments dating and their importance at explaining speleogenesis and karst genesis. This part is followed by a detailed presentation of the bases of palaeomagnetic method and magnetostratigraphy in particular related to way of sampling loose sediments and flowstone. In the flowstone the magnetic record is very weak as it contains a tiny bit of iron only; the devices in the laboratory were adapted to measure weak magnetization.
A large part follows containing 21 locations, 19 in Slovenia and two on the other side of the border in Italian Karst where various sediments were analyzed by palaeomagnetic methods. Each location is placed in space describing geological, karstological and speleological properties. A precise description of studied sediment profile with lithological and mineralogical composition follows obtained by various research methods. Every profile contains also the palaeomagnetic results with magnetostratigraphic and palaeomagnetic properties. There, where fossils were found they are paleontologically defined. The description of results is followed by interpretation and discussion about the age of sediments.
An important part of this book treats the significance of performed researches for the development of the dating method. Palaeomagnetic dating method is comparative, meaning that for definition of absolute sediment age we need additional data provided by other methods. The problems occurring when analyzing the sediments in karst caves due to their specificity are described as well as technical solutions of problems. A survey of achieved dating is added as well as their importance to understand the development of caves and karst in Slovenia, for development of surface and for time definition of known tectonic events.
The book is interesting for scientists and experts dealing with karstology, speleology, quartarology, paleontology, geomorphology and geophysics who are engaged in palaeomagnetic dating methods and magnetostratigraphy. This book offers new comprehension from all the mentioned research topics important both for Slovenia (understanding of its geological history, surface development and age of karst) and the international scientific sphere; with the concrete results the book is an important contribution to the science of karstology, geology, geophysics and structural geology.

REVIEW OF THE PROBLEM

GEOGRAPHY, GEOLOGY AND KARST IN SLOVENIA

The History of Palaeomagnetic Research of Karst Sediments in Slovenia

Geology and Geomorphology of The Dinarski Kras

Geology and Geomorphology of Alpine and Isolated Karsts

INTERPRETATION OF THE MAGNETOSTRATIGRAPHIC RESULTS

INTERPRETATION OF THE MINERALOGICAL RESULTS

DISCUSSION OF THE AGE INTERPRETATIONS


price
not for sale